How I Made My Own iPhone – in China!

I built a like-new (but really refurbished) iPhone 6S 16GB entirely from parts I bought in the public cell phone parts markets of Huaqiangbei. And it works!I’ve been fascinated by the cell phone parts markets in Shenzhen, China for a while. I’d walked through them a bunch of times, but I still didn’t understand basic things, like how they were organized or who was buying all these parts and what they were doing with them.

So when someone mentioned they wondered if you could build a working smartphone from parts in the markets, I jumped at the chance to really dive in and understand how everything works. Well, I sat on it for nine months, and then I dove in. 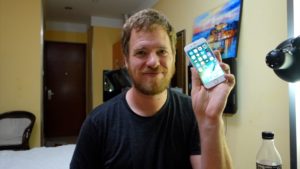 You might wonder why I chose to make an iPhone 6s and not an iPhone 7. I had two reasons. The first was that I already own an iPhone 6s that I bought in an Apple store, and I thought I might end up needing to have an identical phone to the one I was trying to build that I knew was assembled by Apple to compare against. In the end, this was never really an issue, and I never ended up having to open it up. It is nice to be able to show people the phone I built side-by-side with a phone bought in an Apple store though.

However, the other reason, which turned out to be far more important, is that iPhone 7 parts are pretty hard to come by in the markets. It’s not totally clear why this is, but I have some ideas. A lot of the parts come from recycled/broken phones, and so it would make sense that there just isn’t that much supply yet. I also think there’s probably really high demand for iPhone 7 parts, so what parts are available may get traded before they make it out into display cases. In some cases, even iPhone 6s parts were a bit hard to come by (mostly the logic board). I keep asking people about this, and people keep saying things like “there should be more after Spring Festival” (which has come and gone) or “there should be more in a month or two – it’s just a temporary shortage right now”. I’ll keep my eyes out – it’ll be interesting to see how this evolves over time.

A bit more about some of the parts: 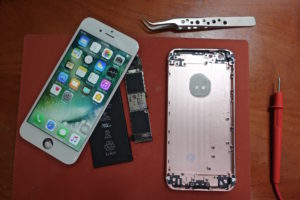 The four basic parts to make an iPhone – the screen, shell, battery, and logic board.

Logic board – This is like the motherboard in a computer. It’s the circuit board that has the processor, flash memory, wifi/cell chips, etc on it. Everything plugs into this. The one I bought is refurbished/repaired, almost undoubtedly from a real, legitimately purchased phone made by Apple that was recycled at some point.

It came with the touch id sensor, because the processor and touch id sensor are cryptographically paired. This means that touch id no longer works if you swap out the touch id sensor. This is for security reasons, to make it harder for someone to malicious bypass touch id to unlock your phone without your permission. But it’s a really crappy restriction when it comes to repairing/refurbishing phones.

I really wanted to solder my own logic board, but this turned out to be a much larger endeavor than I thought. Stay tuned for more on this!

Screen – I really wanted to assemble my own. But there were two issues – you need a bunch of bulky equipment and I had an incredibly hard time trying to buy a bare lcd/digitizer. You can get them apparently, but they don’t seem to be readily available over the counter in the markets. So instead, I bought a broken screen from a phone repair booth, and had them completely disassemble and then reassemble it with new parts, other than the lcd/digitizer.

Battery – These are everywhere, and _really_ cheap. Like $5 USD cheap. No clue if it’s real, but I was told it is, and it looks like it is.

Back/Shell – I originally wanted to make a gray phone with a black front, to match my everyday carry phone I bought in an Apple store. That way I would have something to compare against. But I ended up having a hard time finding a logic board with a black touch id button. However, there were lots of logic boards with white touch id buttons with rose colored rings, meant for a rose colored phone. So I ended up buying a second, rose colored back, hence the rose colored phone. The back I bought had an Apple logo, but zero laser markings inside or outside, so I’m pretty sure it’s not from a used phone.